Automated releases in a cross-language monorepo

Monorepo is a popular way of organizing code bases in large organizations like Google, Facebook and Twitter. You can also find many open source projects that use a single git repository to store and develop multiple sub-packages. Some examples are Babel and Laravel.

If you are not familiar with the term “monorepo”, check out this 5 min video from Fabien Potencier, creator of Symfony framework.

I personally have been using this technique for many years without knowing its name. The idea is very simple: you store your backend/ and frontend/ folders in one repository. This is a natural approach for full stack developers who usually touch both folders on a daily basis. It is very handy to have entire project codebase in one place when you develop and test the application. Below just a few benefits that came to my mind:

On the other hand, this approach isn’t applicable to all teams and all organizations. Read an article “Don’t ask if a monorepo is good for you – ask if you’re good enough for a monorepo” to learn more about monorepo disadvantages. It’s important to remember Conway’s law:

Organizations which design systems are constrained to produce designs which are copies of the communication structures of these organizations.

In case of SystemSeed, monorepos feel very natural because they reflect communication structures in a flat team of full stack developers. For different kind of organizations, setting up a monorepo may require significant changes in development & collaboration practices, which is not always worth it.

Back to original topic for this post, let’s say we have a monorepo with two (or more) separate packages written in different programming languages: PHP for backend and Javascript for frontend. When changes are made in one of them, or in both, we want the corresponding packages to be released in Packagist for PHP and in NPM for Javascript.

Initially I prepared myself for writing a lot of bash scripts in our CI to make automated releases for both packages work. It turned out that everything has already been written in Javascript (Atwood’s law in action), and all I needed is to install and configure a couple of packages.

semantic-release automates the whole package release workflow including: determining the next version number, generating the release notes and publishing the package.

If all your code is written in Javascript, you can skip further reading and go ahead with semantic-release-monorepo.

In my case, I had to install semantic-release for both packages separately.

To add a new package to Packagist you need to link a repository with a valid composer.json file in the repo root. 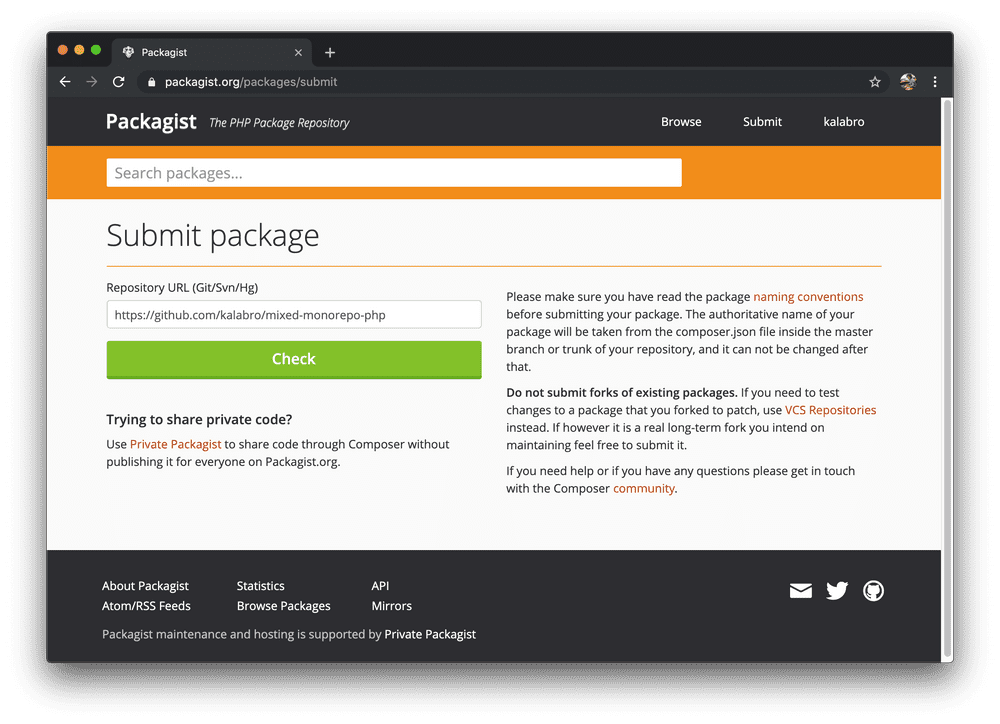 It means that I have to push PHP code from my monorepo to a separate PHP-only repo for Packagist to be happy.

To mirror monorepo to separate child repositories, I used splitsh-lite, the tool that is used by Laravel and Symfony for the same purpose. The tool finds commits that affected the package’s codebase and pushes them to another repository. Obviously, it preserves all commit information so that semantic-release can decide what kind of release to create for each package.

In SystemSeed, we’ve been using Circle CI long before I joined the team in 2015. I’ve never worked with other CI tools but they all seem to be quite similar.

You can find example setup for Circle CI in a demo project on GitHub.

CI setup contains two steps. First, on merging in master splitsh-lite script is triggered. It mirrors new commits (of any) to the corresponding child repos.

The second step is to trigger semantic-release for each child repo. Again, a simple Circle CI config handles it on every push into child repo: https://github.com/kalabro/mixed-monorepo/blob/master/js/.circleci/config.yml

You can find full monorepo setup for a real project here: https://github.com/systemseed/falcon

All you need to start developing is to clone the repo and run make install. When you are done and your pull request is merged in master, CI will figure out what to release and which version numbers to assign.

Give it a try and let me know your thoughts!

I love solving problems regardless of type of work: from basic client support to advanced devops tasks. I do it better when I understand how things work but sometimes it just feels like magic.